How Much Do UX Designers Make? UX/UI Salary Report (2022 Update) 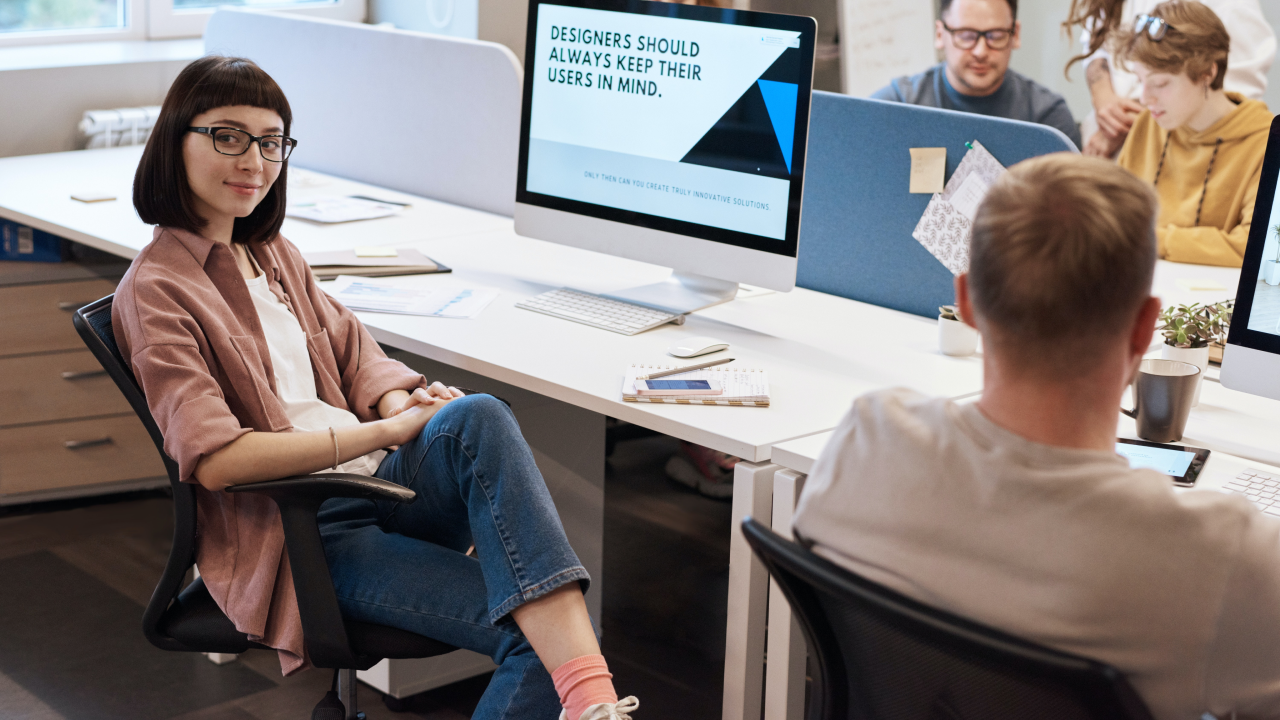 Exploring a new career path requires considerable soul-searching. You might ask yourself, will I enjoy this work? Do my skills and talents make sense in this industry? At some point, however, students and career changers must buckle down and ask the tough question: will this job pay me well?

If you are thinking about a career in user experience (UX) or user interface (UI) design, you’re in luck. As of 2022, workers in UX design tend to be well compensated, even at the entry level.

Here is a quick overview of typical UX design salaries at different levels of experience from Payscale, updated for 2022:

Many Avocademy alumni have found exciting roles in a wide range of work environments, from Fortune-100 megacorporations to smaller startups and nonprofits. Our graduates have seen a similarly wide array of offers, ranging from about $50K to $150K.

Range of Time Needed to Find a Job

As you can see, Avocademy graduates are also finding new roles quite quickly, with a typical job search of fewer than three months. Considering that most Avocados are new to UX design, these stats are very impressive indeed!

Why Do UX Designer Salaries Vary So Much?

It is important to note that UX/UI design and related fields are relatively new, changing all the time, and not clearly defined. As such, the U.S. Bureau of Labor Statistics does not report UX designer income information and instead groups them with salary data for web developers and other digital designers.

To add to the confusion, different sources provide different salary estimates for UX designers. Some sources, such as Payscale, report entry-level UX designer salaries at around $65,000 a year. However, DICE writes that some lucky UX designers can start out making over $100,000 a year. Different companies also use different pay thresholds when hiring UX designers.

Despite these disparities, one trend remains clear: with experience, UX professionals have the potential to generate six-figure incomes.

So how can newcomers to the world of UX/UI tap into this potential? Learning what to expect is the first step toward a rewarding (and lucrative) career. Keep reading to take a closer look at UX design salary statistics and trends.

Let’s get this guac!

UX/UI salaries vary based on your location. According to Indeed’s analysis, UX designers in New York City were the best paid last year, with an impressive average salary of around $127,000.

Other large cities around the US reported similarly high salaries. Here is a compiled list of the top states and cities that pay UX designers well. These places are not listed in any order; rather, they represent a collection of locations that consistently rank highly for base UX/UI salaries:

Other Good Cities for UX/UI Designers

The best-paying cities vary slightly by data source, but overall these numbers are quite similar across the country. A designer looking to earn the big bucks can choose from many different metropolises.

A word of caution: while these salaries might be similar, cities can have vastly different numbers of opportunities available. Before moving 2,000 miles to chase your UX dreams, be sure to scope out the job market and consider local living expenses. Better yet, have an offer in hand before you board a plane!

If none of these cities appeal to you, remember that you don’t have to relocate to start a UX career. Many UX/UI roles are completely remote, allowing professionals to earn tech field incomes without living in expensive urban neighborhoods.

UX Design Salaries in Other Countries

In the United States, UX base salaries range between $75,000 and $100,000 annually. Our friends in Europe, Asia, Australia, Canada, and South America can generally expect lower salaries, except for Switzerland. According to UXDesignerSalaries.com, Switzerland outranked the U.S. with an average annual salary of $100,890.

UX/UI Design Career Outlook— Why is UX in Demand?

Like nearly all careers in tech, the UX job outlook for the next decade is promising, and UX-related skills are in high demand. According to a recent LinkedIn report, companies ranked UX design fifth among their top-ten most desired hard skills.

While no one can predict the future, industry trends suggest that demand for UX/UI professionals will not wane anytime soon. In fact, the UX/UI job market was forecast to grow 22% over the next 10 years. At the time of writing, there were over 36,000 open UX roles in the United States posted on Indeed and Glassdoor combined. In 2022 and beyond, employers will continue to post fresh UX/UI openings for job seekers.

Unlike some careers, UX/UI work is not limited to a specific type of company or even a specific industry. Startups and established companies alike value these talents, which helps create a strong UX job market. Companies of all sizes currently seek UX/UI designers, from those with fewer than 50 employees to tech giants with over 10,000 workers.

So why are UX/UI designers in demand? Put simply, there are over a billion websites and millions of mobile applications in existence. Someone has to make sure they all work! If a user can’t navigate a digital interface, they won’t return, and they definitely won’t make a purchase. UX/UI professionals keep users, and customers, coming back for more.

Savvy businesses know that customer loyalty is essential for success. That’s why they hire UX/UI professionals.

One of the best parts of working in UX/UI is the sheer variety of career paths you can pursue. Those who are interested in this field can find a niche role that plays to their unique strengths. From strategy to writing to research, the different types of UX/UI career paths are nearly endless.

With many unique UX/UI specializations come many different starting wages. Some roles are in more demand than others, and specialized UX/UI skills, such as voice UX design, can bump up a candidate’s compensation package.

Before deciding your preferred flavor of UX/UI, consider the pay differences among these roles. You may be only one or two skills away from a higher salary!

What does a UX Designer Do?

According to Payscale, the average UX base pay is about $75,366 a year.

What does a UI Designer Do?

While UX designers conceptualize pathways and frameworks for users to interact with a product, user interface (UI) designers bring those ideas to life. UI designers focus specifically on refining digital interactions, optimizing and beautifying each touchpoint to make effective and delightful digital products.

What Does a Product Designer Do?

Payscale reports that at the beginning of 2022, the average product designer base salary is $86,009 per year.

What does a UX Researcher Do?

According to Payscale, UX researchers make an average base salary of $88,101 per year as of 2022.

What does a UI Architect Do?

UI architects organize the way digital interfaces present information to make them more logical and useful. They work alongside UX/UI designers to help bring structure and flow to a complex product.

What does a UX Copywriter Do?

UX copywriters oversee the textual elements of a digital product and work to optimize them throughout the design process. They ensure that all written content (such as microcopy, instructions, emails, and more) provides clear navigation and a pleasant experience for users.

What does a UX Strategist Do?

This role embraces a big-picture mindset. Rather than considering the user’s needs alone, the UX strategist makes design decisions based on the market. They work to determine how improving user experience can help a product, and a business, succeed. UX researchers often work across many teams to synthesize goals, collaborating with designers and stakeholders alike.

Glassdoor reports that the average base pay for UX strategists is $101,061 per year.

Beyond Salary: Other Perks of a UX/UI Career

Many individuals pivot their careers to UX/UI simply because it pays well. Obviously, salary matters. Still, it’s worth noting the non-salary upsides of starting a career in UX design.

The first major perk of a UX/UI career is the relatively low barrier to entry. This path does not demand nearly a decade of formal education, unlike other high-paying careers.

Another UX career perk is flexibility. Like many tech jobs, much of the UX/UI design process is computer-based work that can be done individually. The forward-thinking and tech-savvy culture of the UX field means that many UXers can work from home.

A final, oft-forgotten UX career perk: the chance to learn and grow! UX/UI careers are always changing. With new UX tools, trends, and strategies emerging every year, UX professionals get to evolve with the field. Boredom is rare in such a creative and dynamic line of work.

How Long Does it Take to Become a UX/UI Designer?

At this point, UX/UI may sound too good to be true. A great salary and enjoyable work? Surely there must be a catch!

We’re happy to say there is no catch. UX/UI jobs are really out there waiting to be filled by talented people like you.

However, major career changes don’t happen overnight. Employers in any industry can be hesitant to extend offers, even to extremely qualified entry-level candidates. As such, landing your first UX/UI position can be tricky. But tricky does not mean impossible!

There are many different ways to break into UX design. At Avocademy, we’ve found that consistent, focused effort works. With the help of a UX mentorship program or UX bootcamp, students land an entry-level UX job within seven months to a year. Our Avocademy mentees often go on to earn salaries between $75,000 - $100,000, significantly boosting their income in a short timeframe.

Ready to Make the Leap? Schedule a Free Mentorship Call!

We love UX/UI, and we love helping people find their place in this field. If you’re ready to set up your free UX mentoring appointment, schedule a call!